On September 1, 1910, Pierre Etienne Bezier was born in Paris. As the son and grandson of engineers, he studied mechanical engineering at the Ecole des Arts et Metiers and graduated in 1930. He earned a second degree in electrical engineering in 1931 at the Ecole Superieure d'Electricite. He earned his DSc in mathematics from the University of Paris 46 years later.

Bezier joined Renault in 1933 when he was 23 years old and worked there for 42 years. From Tool Setter to Tool Designer to Head of the Tool Design Office, he held several positions over the years. He designed most of the 4 CV mechanical parts as Director of Production Engineering in 1948. In 1957, he became Director of the Machine Tool Division and was responsible for the automatic assembly of mechanical components, and for the design and production of an NC drilling and milling machine, most probably one of the first machines in Europe. Bezier became managing staff member for technical development in 1960 and held this position until 1975 when he retired.

He began researching CADCAM in 1960 while working on his UNISURF system. During the 1960s, he was interested in drawing machines, computer control, interactive free-form curve and surface design, and 3D milling for manufacturing clay models and masters. The system was launched in 1968 and is currently used by approximately 1500 employees.

In 1968, Bezier became Professor of Production Engineering at the Conservatoire National des Arts et Metiers. His tenure in this position lasted until 1979. Aside from writing four books and numerous papers, he received several honors, including the "Steven Anson Coons" from the Association for Computing Machinery and the "Doctor Honoris Causa" from the Technical University Berlin. Among his honorary memberships are the American Society of Mechanical Engineers and the Societe Belge des Mecaniciens, he is a former president of the Society of Engineers and Scientists of France, the Society of Engineers and Scientists Arts & Metiers, and he was a founding adviser to "Computer-Aided Design".

Definition: Bezier curves are curved lines or paths defined by mathematical equations. The method was developed by French mathematician and engineer Pierre Bézier during his time working for Renault in the late 1960s. For drawing paths with Bézier curves, most graphics software includes a pen tool.

The most basic Bezier curve consists of two end points and two control handles. Each control handle defines the shape of the curve on either side of the common node. In order to grasp the geometry involved in drawing Bézier curves, some study and practice are required. The Bezier curve is a wonderful tool for drawing once mastered!

Pierre Bezier was born September 1, 1910 and died November 25, 1999 at the age of 89. In 1985 he was recognized by ACM SIGGRAPH with a 'Steven A. Coons' award for his lifetime contribution to computer graphics and interactive techniques.

A Bezier curve with three nodes. The center node is selected and the control handles are visible.

A Bezier curve with three nodes. The second node (from left) is selected and the control handles are visible. 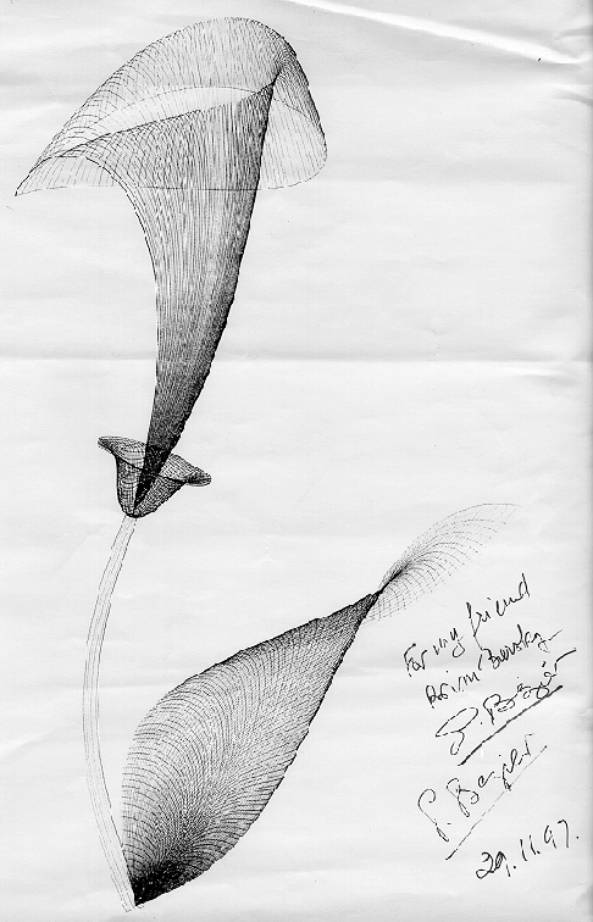 Inventor of the Bezier Curves